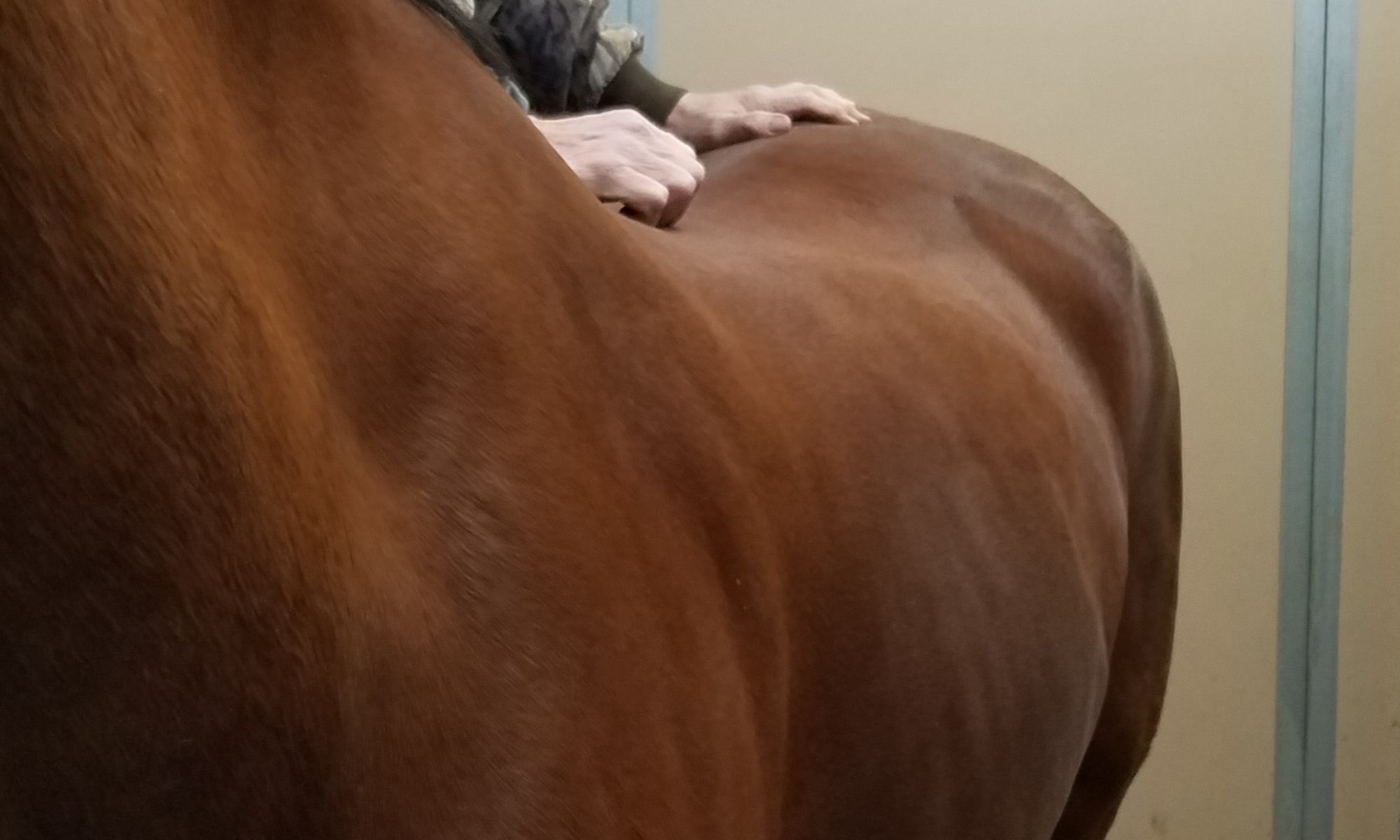 It’s no secret that dressage work is a great indicator of how “even” a horse is. If a horse is lacking in straightness, gaps will inevitably begin to appear in training. As Nautica’s first two months learning dressage progressed, I started to notice us having a little trouble tracking right.

One major thing we are working through in our lessons is Nautica’s short, choppy gait behind. When trotting on a left bend we have brief moments of true tracking up of the hind legs. They are short moments in between all the “tap dancing”, but they’re there. To the right, we’re still struggling with teeny-tiny little trot steps. We call it Nautica’s “sewing machine” trot because his legs seem to go straight up and down rather than forward.

We already determined that there was a noticeable weakness in Nautica’s right hind due to its underuse following his 2015 fracture. Our instructor gave us exercises to strengthen the leg and aid in working through this issue. While the exercises were originally helping, Nautica still seemed to experience more difficulty bending through his ribcage when trotting on a right curve more so than to the left. Without the bend, I couldn’t ask Nautica to bring his right hind leg up under his body to be engaged correctly.

This horse may not have any spectacular trot lengthening or the ability to physically perform an extended gait for quite some time, but he like any other normal horse will be able to engage his hind legs on a circle! That is just a basic horse thing. After ruling out other issues such as saddle fit, we contacted our chiropractor to do an evaluation and adjustment.

It turns out Nautica was trying to tell us something.

He was primarily needing adjustments in his mid- to lower-back, particularly in his L3 through L6, his sacrum, a couple of his right side ribs and both of his sacroiliac joints, particularly the left. The SI joint finding was the most interesting to me because, during Nautica’s fracture incident, the right side of the sacrum was the part most involved. From this information we determined that he was still, unconsciously or not, favoring his left side.

Despite these findings, our chiropractor determined that the previous injury was not causing Nautica any unsoundness. He also confirmed our trainer’s theory that the shortness of gait in Nautica’s hind end was just a problem of weakness and would be corrected with time as Nautica builds up his strength. Our chiropractor completed the adjustment and we let Nautica rest for 24 hours.

The first ride back was a marked difference! Nautica accepted my leg much more willingly and began to offer longer steps with both hind legs. He was able to bend equally in both directions and stayed “straighter” on his circles without falling in.

Equestrians tend to have mixed opinions about chiropractic care in horses. For Nautica and me, it works. We have been using our equine chiropractor for a few years now. During Nautica’s saddle-seat career, we found the adjustments helped keep him supple through his neck and back so he could best perform his high-stepping, high-impact gaits. Dressage is proving to be no different. We are very thankful that we were able to keep our same chiropractor during Nautica’s move to the new barn, especially since he was already aware of Nautica’s previous injury and takes it into consideration when adjusting him.

This site uses Akismet to reduce spam. Learn how your comment data is processed.